Well, maybe it is…maybe it isn’t.. when I was a kid I remember wanting to be friends with an older girl(back then teenagers seemed so cool) who was about 15 years of age, because I thought that she was really cool and pretty. But according to today’s beauty standards she would be considered fat and ugly..but to me she seemed pretty which some of my  friends disagreed upon! In this case beauty really is in the eye of the beholder!

Although cultural beauty standards and media has a lot to do with it. We don’t quite realize the massive influence media has on our lives. Thigh gaps, anorexic models..where did all these come from? The media!! that’s where! in fact according to a study by the Girl scout of America in 2010 out of over 1000 adolescent girls surveyed, 88% of the girls believe that the media puts a lot of pressure on them to be thin,this pressure sometimes leads to anorexia. Well,What do you expect? since we are bombarded with these unattainable standards of beauty in the media, of course it hugely impacts how we perceive beauty.

On the other hand, in Mauritania (an African country), tradition holds that among women, rolling layers of fat are the height of sexiness. Young girls are brutally force-fed a diet up to 16,000 calories(more than four times that of a male body builder). And if you wanted to be considered beautiful in ancient japan you had to ditch those pearly whites and dye them black! 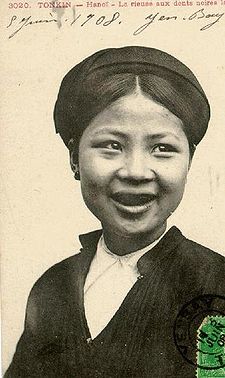 like this! The practice of blackening teeth continues among many minority groups in Asia. Leaving the bizarre beauty traditions aside. I have deduced that tradition, culture and the media are what defines beauty. In some cases a person may find something admirable that may not appeal to another. like marmalade! or pickled cucumbers. Anyways People’s appearance don’t matter their personality does! so let’s stop prioritizing  vain physical appearance and spread love cause love conquers all!♥♥

Are you new to blogging, and do you want step-by-step guidance on how to publish and grow your blog? Learn more about our new Blogging for Beginners course and get 50% off through December 10th.

WordPress.com is excited to announce our newest offering: a course just for beginning bloggers where you’ll learn everything you need to know about blogging from the most trusted experts in the industry. We have helped millions of blogs get up and running, we know what works, and we want you to to know everything we know. This course provides all the fundamental skills and inspiration you need to get your blog started, an interactive community forum, and content updated annually.

♥♥I’ve decided to start an anonymous blog, where I let loose my thoughts and share my point of view on the world. It’s kind of like an on-line journal too, and now about me, I’m a goofy teenager who once was a tomboy but now I can’t quite figure out who I really am, let’s say I’m a little bit of everything! A complicated everything! Most of the time i can’t predict my own moves! speaking of moves, moos, mews..I adore cats! i have a pet cat named Lucinda.. she is one of the most extraordinary cat I’ve met! She took my appreciation for cats to whole new level! so that’s me! An unpredictable ,goofy, clumsy, cat lover who has a fascination for natural home remedies, I’ll be posting about them too, age-old home remedies handed down from my grandma’s grandma. Join me on this roller coaster ride I’m sure we’ll have loads of fun together! BTW tell me about yourself in the comment section, I would love to know about you guys!♥♥

A fun place where I express my self